I will admit to being a bit confused about the date — regarding the year, no less — for a race held at Branford Park, New Haven, Connecticut. It had two feature events, one for three-wheeled vehicles and one for four-wheeled vehicles, both being run in three heats. I had always assumed that the meeting took place in 1899. I think that there is now sufficient reason to suggest that the date is off a year.

Although there is not a specific date provided for an event held at Branford Park, the Betts Brothers (1) have it taking place during 1899. This date is also reflected in Al Bochroch’s American Automobile Racing: An Illustrated History (2) — probably since it is using the Betts Brothers data in the appendix listing American racing events.

In his The History of America’s Speedways, Past & Present, Allan Brown places the date as 25 July 1899 in his entry on Branford Park, indicating that the race took place on that date. Or, that it may have taken on that date since it is rendered as “(7/25/1899-c. 7/25/1900),” which usually indicates the dates during which a track was active.(3) Initially, I thought I sensed an element of doubt by Brown regarding the date. However, in 2008, Brown clearly states that, “Connecticut’s first recorded auto race was at Branford Park, a horse-racing track in New Haven, on July 25, 1899.” (4) This would seem to indicate that Brown was very confident regarding the date.

It was not until I begin digging a bit into the very early automotive competitions in the United States for a possible paper on these events during the Late Victorian Era, 1895 to 1901, did I begin to sense that there might be a problem with the date. I looked for anything relating to an automobile or “horseless carriage” or “tricycle” or “motor vehicle” race held at Branford Park in 1899. Instead, I discovered articles in The New York Times and the Chicago Tribune on an event held at Branford Park in 1900. (5) Initially, I thought this was a later event, but the winner listed by Betts was Hiram Percy Maxim in a Columbia — who was also listed as the winner of the first five-mile heat for four-wheeled vehicles in both the New York and Chicago papers.

This would strongly suggest that the Branford Park event took place on 25 July 1900 – and not in 1899 as the Betts and Brown dated the event. I am at a loss as how to explain that both Brown and the Betts getting the date wrong by an entire year, although Brown seemed to sense, at least at one point, either some doubt or at least ambivalence regarding the date.

It is interesting to note that both the Times and the Tribune articles state that the Branford Park meeting was, “The first automobile race meet ever held on a race track in this country,” as the Times stated it. The Tribune article had the sub-heading, “Track Racing for Motor Vehicles Inaugurated in America,” making the same claim as the Times. Of course, there is the awkward problem of the race meeting held at Narragansett Park – a horse-racing track – in September 1896, which would tend to cast doubt on this claim. In addition, there is also the event run in October 1899 on the Galesburg District Fair Grounds, which was essentially a match race scheduled for 50 miles which was halted at 15 miles after one of the competitors had dropped out. (6)

So, this is yet another correction that needs to be made to the Record Book.

Thanks to a program provided by Mark Sanders, it can be firmly established that the event held at Branford, Connecticut, took place in 1900. The program for the “First International Automobile Exposition and Races Ever Held in America,” carries the date of 25 and 26 July 1900. The venue is given as Branford Driving Park, Branford, Connecticut. 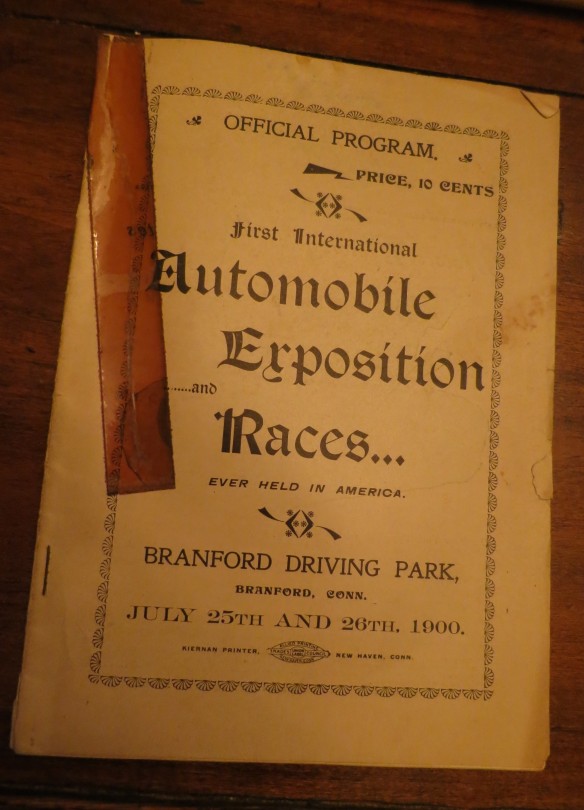